For this edition of TNMPeople, in honor of Veterans Day 2021, David – one of 31 veterans at TNMP – was asked to reflect on his time in the service.

It seems like a good match that a Marine who repaired helicopters later would be a hands-on technician working on electric utility facilities.

David was a young man from Laredo when he joined the Marines. A test he took upon entry identified him as a good candidate to be an aviation mechanic. Helicopters sounded good to David. 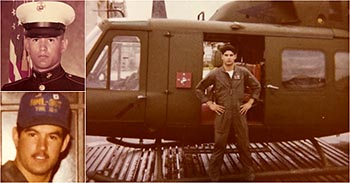 "The opportunity with helicopters is you get to fly in them," he says. "With jets, you just fix them."

Memories from the air

David, a TNMP substation tech in North Texas, repaired Huey helicopters and also qualified as a door gunner while serving in California, Okinawa and South Korea.

"I really enjoyed it," he says. "I was flying two to four hours every day on average. We'd do all kinds of exercises: takeoffs and landings, firing the guns, practicing medivacs.

"A lot of times I was in charge of preparing helicopters that flew higher-ranking people. I got to fly with the commandant of the Marine Corps a couple times and the sergeant-major of the Marine Corps. Not a lot of people get to do that."

David put those hands-on mechanical skills to good use when he left the Marines and started work in the utility industry, eventually joining TNMP as a lineman in 1996.

Two brothers also served in the military and David has a strong respect for what service members are trained – and are ready – to do.

"These are people who made the ultimate sacrifice, and those who have been wounded, lost limbs and have other medical issues because of war. I respect all of those people."