Even since Wayne started as a crew member for a power line contractor in the early 1990s, the change is very noticeable. 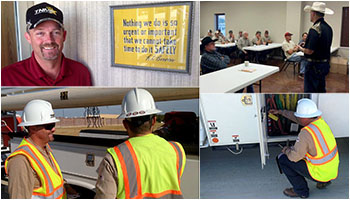 “How it was when I started and how we do it now is night and day,” says Wayne, now a former lineman and one of three employees who coordinate safety training and compliance at TNMP.

“Over the years, we’ve gotten more and more safety tools. Now it’s more about safety instead of just the work. Back then, it was, ‘How fast can you get work done?’ But now it’s, ‘How safely can you get the job done?’ ”

Wayne joined TNMP in spring 2015, working out of Lewisville, after years with power line contractors, including four years as a safety coordinator.

That role started with training classes from OSHA and the Red Cross. Wayne was fully on-board with the new job.

“The reason I wanted to go into safety is that you hear about accidents and injuries in the industry and the impact it has on their families,” he says. “It touches you.

“… It’s not like if we make a little mistake, we get a bump. If we make a mistake, it changes your life forever.”

He keeps both feet on the ground these days, but Wayne admits that the urge to do lineman work comes back to him sometimes.

“There are plenty of times we’ve gone out on a storm and I’ve had the itch to get up in that bucket and get people’s lights back on when I knew the guys needed more help,” he says.

Experiences like a little girl in Florida who brought linemen cookies after they restored her family’s power after a hurricane help provide that motivation, even if other guys are up making the repairs now.

“Those things are priceless,” Wayne says.